The script builds a quantum circuit describing an unstructured search algorithm inspired by the grover’s algorithm. Its goal is to find among all possible inputs, the one(s) with the highest probability to match a predefined criteria.

It is composed of an oracle and a diffuser. The oracle is a black-box function taking a state vector as input and introducing a phase shift in the target qubit if the input matches the predefined criteria.

The diffuser then performs amplitude amplification using the target qubit’s phase kickback when the oracle matches, thus increasing the probability of a matching input vector to be measured.

Basically, the output of the circuit is the input matching the criteria described by the oracle.

All that remains to do for us is to understand what that criteria is.

We can see that the oracle is built using the circuit.json.

The oracle is composed of 1408 multi-controlled X (MCX) gates, each controlled by 1 or 3 input qubits with a control state given in the json. Each MCX gate acts on a dedicated ancilla qubit.

On the sample above, we can see that the circuit key of the json is an array of 1408 elements. On all examples, we will work on the 5 first elements which are enough to understand what is going on.

Below is a simplified view of the circuit described by the 5 first gates above, where the ancilla qubits are from q3 to q7 and where q0, q1 and q2 correspond to the 1st, 9th and 281st input qubits of the real circuit respectively. 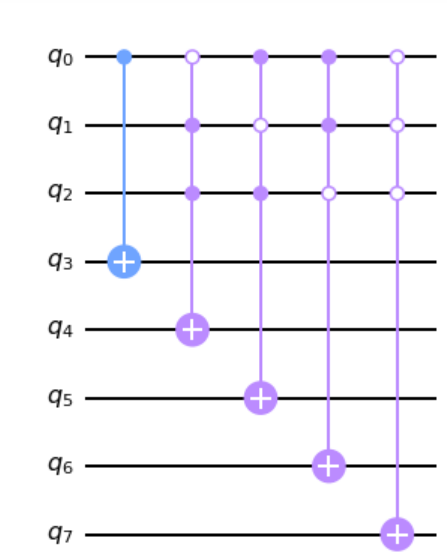 Here, the target qubit is represented by q8, see how the q8’s gate is active only if all ancillas are |0>: 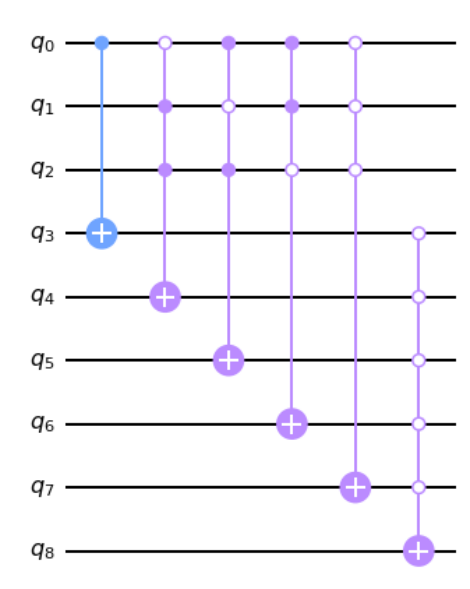 So we want all ancillas to be |0> but it is also their original state. We therfore have to influence the control qubits of each MCX so that none actually performs the X gate on any ancilla. This means that among all control qubits of a MCX, at least one must have a state different from its control state, thus deactivating the gate.

So we said earlier that the MCX have either 3 or 1 control bits and that at least 1 of the control qubits must mismatch from their control state.

Obviously this results in an equation system but let’s see what we get with only the obvious qubits: the ones controlling an ancilla by themselves.

Indeed if an ancilla is controlled by a single input qubit then this qubit MUST be different from his control state so the X gate stays disabled. Therefore, any input qubit marked as False and as the only control of a gate MUST be set to |0> to match the oracle. Same is true for qubits marked as True that must be in state |1>.

We can illustrate this with the circuit below: q3 MUST be set to |0> so the gate must be deactivated, so q0 MUST be |0> (control state 1) to deactivate the gate.

So let’s try to set all obvious qubits:

Well, most of them are 0, except, the first byte: z

Which is a good sign that we are indeed decoding a flag of the form zer0pts{...}

For MCX with 3 control qubits, we simply need to put them in an equation system alongside the trivial qubits.

We will have a total of 1408 equations, 1 for each MCX, each equation basically saying that at least 1 qubit must be different from its control state, and therefore equal to its assigned boolean in the json.

Let’s take the same circuit again, we will have the following system:

Once the system is solved, we will know the state of all qubits that match the oracle, which is the one outputed by the quantum circuit. We will then be able to decode it to get the flag.

I used z3 to build and solve the equation system:

Running the script outputs us the equation system, sat indicating that z3 found a solution to the system and the decoded solution of the system with the flag: zer0pts{FLAG_by_Gr0v3r's_4lg0r1thm}